In a seesaw affair that tested the undefeated Luxemburg-Casco Spartans, a late score sealed a 40-34 victory over the Ashwaubenon Jaguars at the Luxemburg Casco Sports Complex in a Division 3 Level 1 WIAA football playoff.

The #1 seeded Spartans were able to prevail over the #8 seeded Jaguars, despite not having star running back Isaac VandenBush.  Back-up Evan Dorner scored two rushing touchdowns, including a 42-yard scamper with just 2:33 left in the fourth quarter to seal the victory.

The Spartans trailed for the first time this year in the fourth quarter 28-27, when quarterback Owen Deprez hit Logan Doell for a 36-yard strike with 8:34 left in the game.

The Jaguars fought back numerous times in the game to give the Spartans all they could handle.

Ashwaubenon came back to tie the game twice in the first half before Deprez connected with Doell on a big 60 yard touchdown pass with 2:35 left until intermission, giving L-C a 20-14 lead at halftime.

A touchdown pass from DePrez to Ryan Routhieaux from 25 yards halfway through the third quarter gave the Spartans a 27-14 lead.

Ashwaubenon would score twice more, taking the lead with 11:42 left in the game.  That set the stage for the heroics by Deprez and Doell.

The Jaguars did manage to score late to cut the lead to 40-34, but Evan Dorner recovered the ensuing onside kick with :42 left to secure the emotional and gritty win for the Spartans.

Luxemburg-Casco (10-0) will now move on to play host to Waupaca in Level 2 playoff action next Friday, as the#4 Comets defeated #5 Portage 35-8.
Matt Piesler and Paul Schmitt will have the call starting at 6:30 p.m. with the pregame show and kick-off set for 7 pm on 96.7FM WBDK. The game audio can also be streamed on the NewRadioSportsRadioNetwork.com. 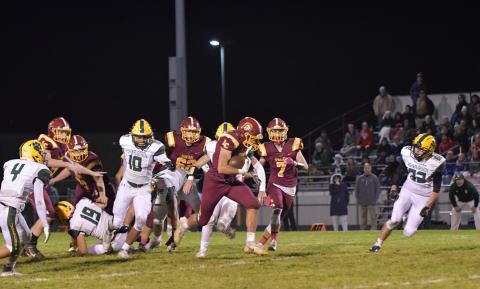